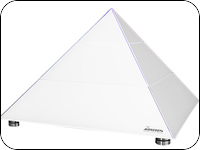 Since its launch in 2010, the design series Avant Garde has proved a success. Those clients who until then had relinquished toSpirovital therapy at home or in the office, not least because the classic Airnergy line is not always appealing enough, can now look forward to a new highlight, the prototype “forged“ under supervision of Kurt Sistig: a pyramid with the exact dimensions and angles of the original great pyramid of Cheops – scaled 1/440. The lower limb dimensions correspond to one royal cubit, exactly 52.36cm. In the construction and true-to-scale calculations of this new design idea, Airnergy’s CEO, Guido Bierther, had support from well-known egyptologist and pyramid researcher, Axel Klitzke (www.hores.org).

Production of the new model Airnergy “Cheops” with the proven 4-catalyst technology will begin in 2014. Similar to the Avant Garde, individual customer requirements in terms of material and colour will be catered for. The first prototype has been constructed in a sandwich method made of clear and white acrylic glass. Fine wood finishes are also possible. Another Airnergy model for individuals who, not only during Spirovital therapy, expect “a feast for the eyes”.

Who is behind Airnergy? How does Airnergy work? Airnergy Video How to set up your Airnergy device FAQ’s Legal Notices Privacy Policy